The Emotional Turmoil of Our American Brand

While studies are measuring mostly external constituent perception of the brand, I contest that it is actually the people of the country that truly make up the brand.

Any brand expert can tell you that the American Brand of inclusion, respect and civility is under attack from the inside. The 2016 presidential election process has brought out the worst of what America has worked so hard to lead the rest of the world in – A happy melting pot of cultures and beliefs; respect of diversity and acceptance of all; a clear path for individuals to seek fairness with personal success and growth attainable to all.

Today, we see mistrust and anger on the rise. We see a level of powerlessness that is perceived by the majority. And we see the political machine take advantage of the current emotional state of the nation. What happened to the middle… why must the fringes define the American brand today and control the dialogue with such firm positions, without the desire or ability to compromise?

Where is the American Centrist? Where are the values that made us a great country?

So let’s start with the key problem of American discourse – the current political system that has been manipulated into an elitist system of power and money.

In the past 20 years congress has altered their districts through “Gerrymandering” so their party no longer loses the elections. These man-made jurisdictional borders need to go back to boarders that use natural land dividers like roadways, rivers and county boundaries. This one issue alone has created American Political Brands that are stubborn, built on uncompromising principles for the benefit of the politician and not the public at large. This has caused the inability of congress to legislate in the best interests of us all and deplete the American principles of fairness and equality.

The selfishness of the politicians along with their focus on short-term personal gains has truly transformed the American psyche to where the average American feels cheated and no longer trusts the American Political Brand. In the midst of this selfishness our leaders plundered the Social Security system, failed to rebuild our infrastructure, have not balance our budget in 20+ years, and failed to create a vision of the future that leverages American Ingenuity.

The 100 Year Plan… it’s what defines an American Brand.

This is one of the ideas that a good political brand strategist should be pushing their candidate on creating. When I Googled “100 year American Plan,” do you know what came up? ISIS and the Muslim Brotherhood’s 100 year plan… China’s 100 year plan… how to write a 100 year business plan… but no plan for America.

I am not saying we need a planned economy like China, but we do need a clear vision of the distant future for America. A framing strategy for contemporary times against each trade deal, each tax change, each treaty, each spending bill… they should all be measured against a sense of our future state and not simply as an independent decision. The 100 year plan should transcend party and politician. Sure, it will need to be adaptable and amended, but the principles of the American Brand should be true to the plan and goals of the country. The Constitution and Bill of Rights define much of the process of governance, but the world is different today and the politicians of today have cut many of the core values from the founding fathers’ intentions (i.e. “for the people, by the people”).

One of the best examples I can give of the necessity of a long-term plan is the issue of Islamic terrorism. It is not new and is not going away anytime soon. Our enemy has a strategy and view that is 1,000 plus years out… It is generational, yet we continue to focus on short-term strategies that fail to address the long-term challenges. You can contain and defend with armed conflict, but you can only win by changing beliefs, building coalitions and exchanging thoughts with the moderates/centrists. We need generational strategies that addresses how to change an enemy’s belief systems… Where is that?

Thinking long-term is simply not happening in the key areas of government. We have a need for an infrastructure strategy for our crumbling roadways and public transportation. With Gas at the lowest cost in a decade, where are the politicians creating the necessary revenue plan to fix the infrastructure and meet our future needs? In October 2015, congress raided our social security program again… this should be illegal. And until the American brand says it is unacceptable to do this anymore, the politicians will keep raiding our futures. Everyone knows our deficit interest, healthcare, social security, and entitlement spending is taking up over almost ¾ of the total federal budget, but no one has the gumption to address the long-term issues that are creating the waste and pork barrel deals that bloat the budgets. The “kick the can down the road” scenario must stop. The true American Brand has always been to sacrifice for the future of the next generation. Why has that changed? We are now seeing the results of short-term thinking… and the outrage that goes along with the behavior.

So just imagine a 100 year plan that every politician needed to vet their policies and ideas against; a vision of the future that every American understood and believed in as the direction of the county. Imagine a time when the people in power stopped making decisions for personal gain and made decisions based upon what is good for America. Imagine an American Brand that clarifies our cultural acceptance of only doing the right things, not just doing what is right for oneself.

The value of America‘s brand has and will continue to change. The brand is tarnished, and simply needs to be re-shined. The ideals of fairness, opportunity, inclusion, and growth can be saved. But, it will take selfless leaders to achieve the next steps – those who care more about the republic than themselves.

The following list is just one person’s view of how to get the American Brand back on track. It is not overly complicated, but you can start with the emotional issues that create the connection to the American Brand and rebuild a brand that is more centered, like most of the nation. A country that cherishes civility and fairness as it looks to a future for its next generations’ successes.

Today, the business of branding a country is actually being measured. In fact, FutureBrand now publishes a Country Brand Index.

While these studies are measuring mostly external constituent perception of the brand, I contest that it is actually the people of the country that truly make up the brand. They produce the products, create the entertainment and build the downtowns that make up the true culture of a country. And the average American no longer likes what they see in our American Brand. Just like Groucho Marx is quoted as saying, “I refuse to join a club that would have me as a member”. The members of our country need to begin to ask themselves… “is this the type of country that I want to see my children inherit”. Thinking beyond oneself is what creates a viable long-term future and must be the essence of the American Brand!

"StrategyFirst" is an ongoing series that helps today’s business and marketing leaders accelerate growth and improve marketing ROI. The ideas covered are an outcome of 30+ years of strategic business and marketing consulting with over 1,500 companies lead by Michael Smith. Most recently, Michael has developed a Marketing Department Roadmap (MDR) process that helps companies optimize their internal processes and team, adapt to disruptive forces and leverage outsourced partners to improve their brand’s value proposition accelerating growth and marketing ROI. To download an outline of the Linx MDR Process click here. 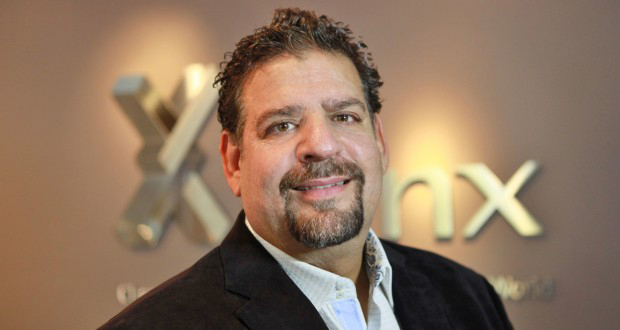 As a marketing entrepreneur Michael Smith builds brands and creates strategic solutions for B2B, B2C and Non-Profit organization, where he operates under a philosophy of being both strategically creative and creatively strategic. He is currently CEO of Linx Communications a Strategic Marketing Technologies company, where he is the lead strategist working on Fortune 500 brands, closely held private businesses and start-ups. Michael is also a Co-Founder of Stewards of Change, thought leaders in technology solutions for human services. The company is bringing InterOptimablity™ to States and Counties nationwide. You can contact Michael at strategyfirst@linx.com.

Turn Your Anonymous Website Visitors Into
Customers with Lead Discovery